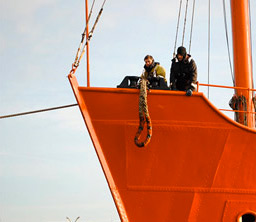 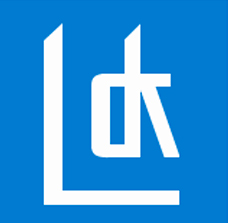 
The craft docking at Dunkirk as independent dates from the early 19th century at the time of sailing ships. Operations input and output of the ships were very delicate. The narrowness of the channel and port congestion freedom left no vessels of any size. Therefore most preferred slouch their sails in the channel current on their headway to be supported by the boatmen who, using winches capstans placed on the docks, and strength train their canoe allowed the ship to dock. They were then responsible for mooring, under the control of the pilot and captain. In the case of equipment, they performed maneuvers and helped reverse the Shifting of the ship.

Defines the term Boatage mooring operations, undocking at any position upon arrival, departure or maneuvering in ports any ship. The Lamaneur is specialized marine who performs these tasks.

The name comes from the old French docking LAMAN, itself derived from the Dutch LOOTSMAN, meaning "man of the probe."
Originally it was a local marine experienced boarded ships to guide them when they entered the harbor, it helped make a "probe" to determine the height of water in the vessel. Subsequently, the business has evolved to support the mooring of vessels.


A BIT OF HISTORY

As soon as the ships price a respectable size, it took a skilled workforce to perform operations Boatage. In Italy, in the Port of Genoa, found traces of a corporation Petty erected in 1340, whose activity was docking and assistance to the vessel in port. This information lets you know that this business is one of the oldest.

The craft docking at Dunkirk as independent dates from the early 19th century, in the era of sailing ships.
After many fatalities due to competition (race to get the first Wed of the ship at sea, to offer its services) at the end of the 19th century, the administrator of the maritime inscription demanded an agreement between any boater docking. Operation will remain the same until 1945 or the port was completely destroyed after the war.

In 1947, two former bosses boatmen were requested by the Chamber of Commerce to reorganize the service, so they create a de facto association. In 1970, this association 24 people, it turns into a cooperative working production anonymous, which is always the structure of society today.

In 1979, the creation of local operating Mole 4, and in 1982 at the same place, creating the workshop and office management.
Today in 2010, the number of the Company is 41 nautical-boatmen, and 4 employees (Secretary Accountant, 2 mechanics, and orderly-operator). We have: 8 stars (4 steel and aluminum 4) 7 hauler trucks Moors, 5 cars and a service vehicle for the workshop and a service truck and three defenses Yokohama.

When a ship arrives in port, the linesmen are responsible for the moor. The procedure varies depending on the berth.

- On a full dock (dock Usinor, Freycinet dock .... Flanders), once docked sailors aboard the boatmen to send a heaving line. There is a very thin nylon line and at the end along with an apple heaving. This is then carried by a spherical one end by a braiding technique.


At the end of this heaving crew fixed the rope that the boatmen pulling on the dock and capelle on the bollard. The boatmen then relaunch the heaving the ship to put the rope next st repeat the operation as many times as necessary depending on the number of mooring to implement, depending on the size of the ship, between 6 and 16 moorings.
Vessel size affects the number of moorings, but also on the dimensions, thus the boatmen use trucks hauler mooring for mooring large ships such as ore.

On a wharf such as BP, CFR, APF, etc ..... the boatmen use boats to get the ropes along the ship, and bring them to bollards or fangs located on dolphins.

In every ship there a respective mooring team in charge of the front and one in the back of load. The number of docking varies depending on the size of the ship and the berth.

According to their position on ships, moorings have different names: tips, guards, ferries, etc. ....


IS ALSO THE Mooring:

Addition operations Boatage strictly speaking that apply to any type of ship berthing of specialized services involved in port security (ship, infrastructure, water and personal), the fight against pollution of plans water and render various services to vessels such as supply or additional crew, transport equipment or personnel, provision of marine equipment with crew expertise, underwater work, work on infrastructure, implementation of defense on ship or small dock and towing, such as museum ships port during the carnival period.

In Dunkirk, as in many ports, the Pilotage service is effective 24 hours on 24, and 365 days a year.

More share in each docking procedure with a VHF radio, allowing it to be in permanent contact with the next channel, the pilot of the ship, port officers, the East and West Towers and other boatmen.


The job of Lamaneur is little known, the word "docking" is even less.

But it's a very beautiful job done by skilled sailors, whose main quality is the love they have for their business and they have the honor to perform in all weather, sometimes risking their lives.

For Lamaneur remains a risky business, with occasional accidents, more or less serious, but sometimes unfortunately, fatalities. Cooperative Society docking port of Dunkirk was the pain of losing four of these boatmen.

All our stars are their names today, Joseph-Marcel for some, Gérald René-for others, for this honor and remember every day in our memories the memories of those four sailors died in the exercise of their profession.